In a large skillet, heat the oil over medium heat.  Add the beef, onion., and green pepper, cooking until the meat is browned; drain liquid.  Stir in remaining ingredients; reduce heat, cover, and simmer for 20 minutes or until rice is tender.

This is my new favorite GPS. This is traditionally served warm.

Slice the uncooked bacon into 1/2 inch pieces and add to a large skillet and cook on medium-high until golden brown. Remove the skillet from the heat. Take out the cooked bacon pieces and dry them in a few paper towels. Remove all but 1/4 cup of the bacon grease.

Reheat the large skillet and add the diced onion. Cook the onion until translucent, about 5 minutes. Add the vinegar, sugar and mustard and continue to cook until a sauce begins to form, about 5 minutes.

Slice the potatoes into 1/4 inch pieces. Add potatoes to the onion mixture and gently mix. Add most of the chives. Add the remaining potatoes and gently toss. You may want to move the mixture to a larger bowl to mix thoroughly.

After transferring to the serving bowl, sprinkle with the rest of the chives. 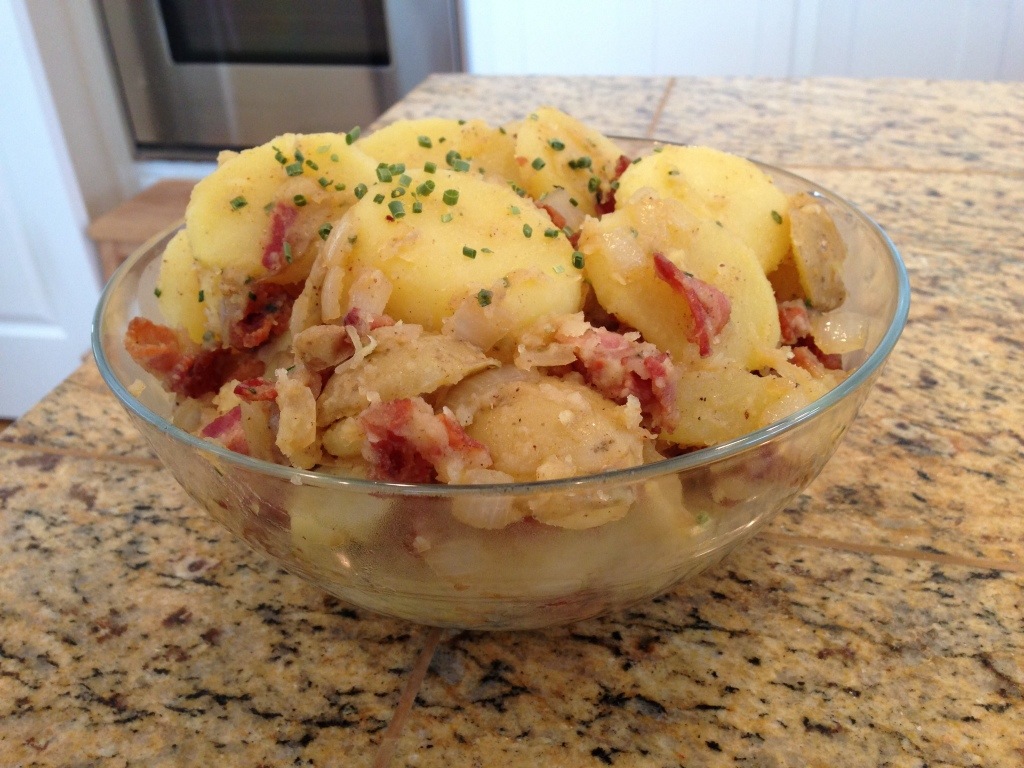 Inspired by visit to Maggie’s Place in New York City this winter, I created an alternate to my favorite slow cooker split pea soup. I had used Mae Ploy’s Yellow Curry Paste several times in other dishes so I already had a container, a little bit goes a long way. My usual split pea soup recipe has chopped ham in it. I didn’t have any available, but I did have a can of low sodium Spam.

In a 5-6 quart slow cooker, layer the peas, Spam, carrots and onion. Sprinkle with salt and pepper. In a microwave safe bowl heat the chicken stock and water, about 10 minutes on high. Add the yellow curry paste to the hot stock and water and mix carefully. Slowly pour the stock over the peas and vegetables. Do not mix. Cover and cook on high for 4-5 hours or until the vegetables are tender. Whisk in the milk a few minutes before serving. Season with more salt and pepper if preferred.

No picture for this post. No matter how hard I try, a photo of split pea soup always looks bad. 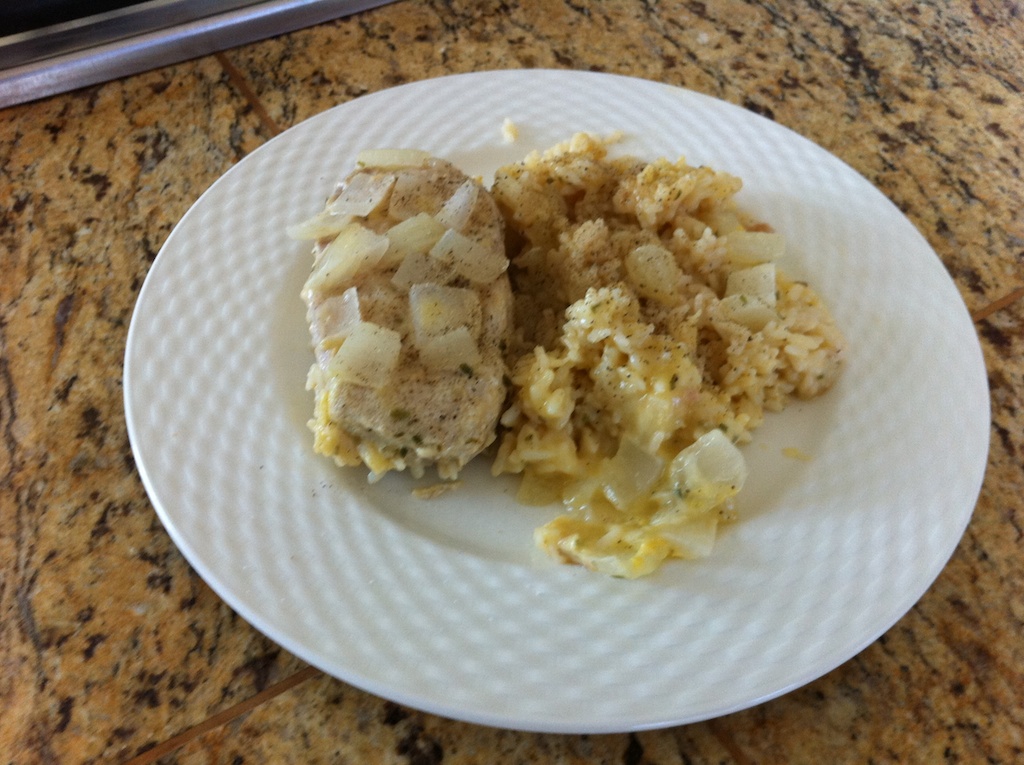 I prepared this dish in my apple ceramic baker. The lid has to be soaked for 30 minutes before baking. It keeps everything moist. The instructions included with the ceramic barker included a recipe for pork chops. The original recipe called for cream of mushroom soup, which I exchanged for cream of chicken.

Make an even layer of rice in the bottom of the baker. Place pork chops on top. In mixing bowl, combine soup mix and milk. Add onions, salt, pepper, garlic powder, and tarragon. Pour mix over pork chops and rice. Cover with pre-soaked lid for one hour at 350 degrees. 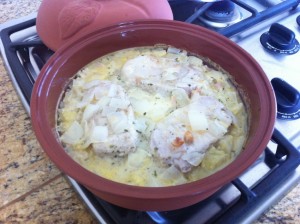 I invented this salad with things I had around the kitchen. I’ve made it twice already.

I made this with Truvia, so if you don’t like Truvia then add 4 tablespoons of sugar.

Preparation
Prepare the carrot, cucumber, and purple onion on the mandolin slicer, set to 1/8 inch thin. Use the julienne setting for the carrots. Pre-cut carrots from the store can be used. Slice the green onion on a long diagonal. Place all vegetables in a non reactive mixing bowl.

In a small bowl. Mix the Truvia, dill, salt, and pepper. Add the rice vinegar, Aji-Mirin, and lemon juice to the bowl and mix. Pour the mix over the vegetables and combine with a slotted spoon. Cover with plastic wrap, removing as much air as you can.

Refrigerate for at least one hour, best over night. Swish the liquid through the vegetables as desired. Also great as a relish with frankfurters. 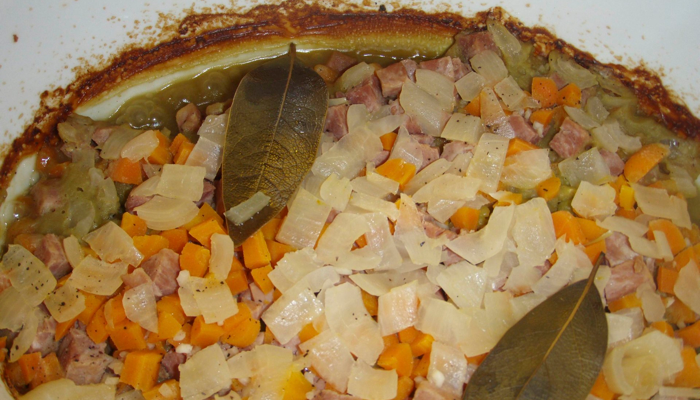 Not everybody likes split pea soup. Not Dad, not Mike, and probably more. Mom, friends, and I think it’s delicious. Now that Autumn has started, I’ve brought out the slow cooker to kick-off this season’s culinary adventure. UPDATE: Mom made this for dad, and now he likes split pea soup.

Layer the first 9 ingredients in a 5-6 quart slow cooker in the order listed. Do not stir. Cover and cook on high for 4-5 hours or until vegetables are tender. Discard the bay laves. Whisk in the milk and let it cook a few minutes more before serving. Season with more salt and pepper.

I prefer the green peas over the yellow kind, however, I have not made this with the yellow ones. Maybe they’re better?

I’d prefer ham out of a pig to that out of a can, but I have to work with what we have. Costco used to have a very acceptable 12.5 ounce can of diced ham, but I didn’t see it last time I was there.

Mom’s Potato Salad
From the kitchen of Mom

Mix all ingredients together, best second day, if it lasts. What can I say, potatoes, hard boiled eggs, onion, and mayonnaise – how could I not like that? 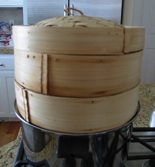 Mom’s French Onion Soup
From the kitchen of Mom

My college roommate Heidi gave me a set of ceramic French Onion Soup crocks.  I still use them.